The Northminster congregation has a history of being involved in social justice issues, from non-discrimination in housing and civil rights the 1960’s and 1970’s to LGBTQIA+ rights and interfaith relations currently.  ​Northminster hosted Congregation Shir Tikvah from the mid-1980’s to mid-1990’s, before their synagogue on Northfield Parkway was built. 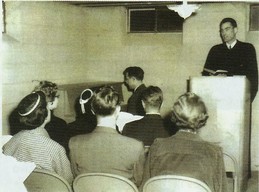 In October, 1954, Rev. MacKay Taylor who, at age 27, was one of the youngest protestant ministers in the area, was called by the Presbytery of Detroit to canvass the area and begin organization of a church.  The son of a Presbyterian minister who served at the church of the Covenant, Detroit, a graduate of The College of Wooster in Wooster, Ohio, and of McCormick Theological Seminary in Chicago, he and his wife, Ruth, the daughter of a Presbyterian minister, moved to the manse on Windemere in Birmingham.

​Twenty-eight people met in the Windemere manse living room on Sunday morning, October 31, 1954, for the first service of worship and church school was held in the manse basement.  When the residence became too small for the congregation, official organization of the church took place with a service in the chapel of First Presbyterian Church, Birmingham, on June 5, 1955.  Seventy-three adults were received into membership as well as sixty baptized children. 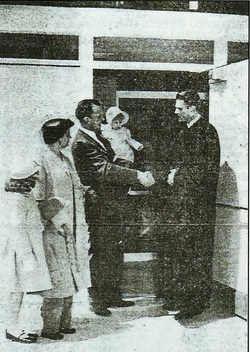 Rev. Taylor welcomes families to the newly built church in 1956
From January 1955 to April 1956, the church rented several rooms of the Poppleton School in Troy for Sunday services and occasional social functions until the first unit of the current location, a small chapel and large church school room, was completed in May 1956.
​
​In the late 1960s, the membership grew, and a second pastor was needed:  the Rev. David Colman was named assistant, later associate, pastor and added to the staff to work with the young people.  When David Colman was called to Pennsylvania in 1970, the Rev. Charles Hansen became the youth pastor and, following his departure, the position was not filled, but the youth were served by various part-time directors of Christian Education and is now handled by the Christian Education committee.

On December 31, 1992, after 38 years as pastor, Mac Taylor retired from the ministry of Northminster and the congregation was charged with the difficult task of studying the needs and goals for the future of the church in anticipation of searching for new pastoral leadership. Northminster found Hank and Judy Borchardt, who agreed to be a part of the church as co-pastors, in November of 1994.  Judy and Hank resurrected youth mission work camps, taking one group in the summer of 1995 and another in 1996.  Around that same time, Hank met and found a common bond with Tony Patrick, the pastor at Trinity Community Presbyterian Church in Detroit, and we became sister churches; a relationship that continues.​